PMON™ is a software solution for performance monitoring of wind and solar farms. PMON™ can identify if farms or individual turbines are not producing as expected given the actual weather conditions and can also be used for estimating available power during curtailments or other situations where the farms are down regulated.

Why do you need PMON™

PMON™ can automatically detect if wind or solar farms or individual wind turbines or PV panels are not performing as they are supposed to. Identifying faulty assets and taking corrective actions can help avoid unnecessary losses which can be costly if not identified as early as possible. This software solution can be useful for both regular maintenance and warranty claims towards the wind turbine manufacturer.

PMON™ also estimates the available (max) power during curtailment or other outages, which can be used for calculating economic losses for internal control and reporting purposes. Loss calculations can also be used for claims towards external parties (for example Transmission System Operators) which caused such curtailment or outage situations.

How does PMON™ work

PMON™ is a self-learning and self-calibrating software system based on a combination of physical models and advanced machine learning. This combines the best of artificial intelligence with relevant domain knowledge in order to provide a system which automatically can identify faulty assets.

Due to the highly configurable system it is possible to minimize or avoid false alarms, by defining a data validation and rules for data correction, which will reduce or prevent false alarms to occur.

PMON™ can run in two different modes: for estimating and calculating losses. Either the PMON™ power curve can be used to estimate available (max) power production from the farm/turbines during curtailment or outages, which can be compared to actual production in order to estimate losses. Alternatively, losses can also be calculated using a set of pre-determined rules. Such rules can be specified in a contractual relationship with a third party like a Transmission System Operator. In both modes, either weather measurements or weather forecasts can be used as input to assessment of losses.

The self-learning and self-calibrating algorithms will continuously learn about the asset characteristics and will adapt to changing conditions, seasonal variations and as the assets age, such that the performance monitoring and loss estimations stay accurate over time.

PMON™ is available as a software package installed locally on the client’s servers or as a service hosted on servers operated and maintained by ENFOR. PMON™ is supplied with various support, maintenance and license packages, which can be tailor-made to client specifications to provide a cost/performance ratio which fits the needs of the individual client. 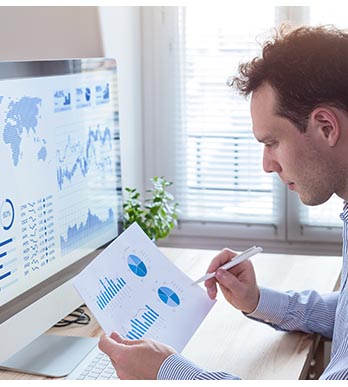 You can find our references on the References page.

To see more complete details and specifications of the service, download PMON™ brochure in PDF format

Ready to get started?

Take the next step toward getting more value from your data.